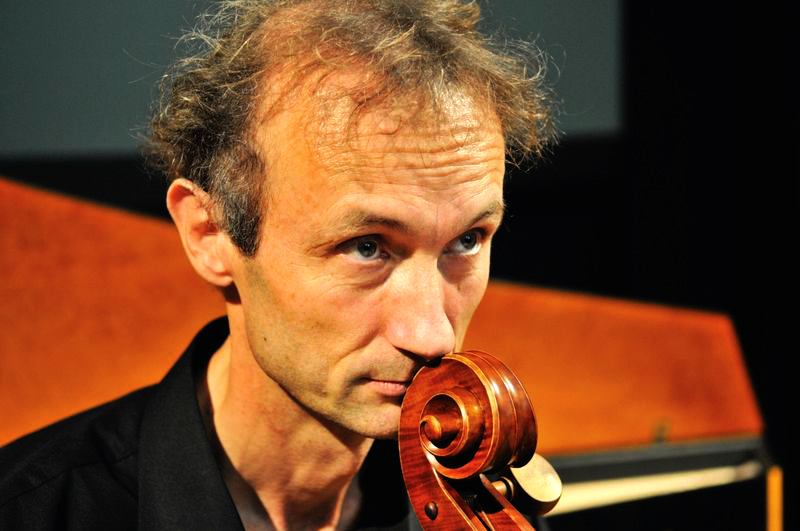 An insatiable researcher, atypical cellist, a renowned teacher, and founder of Les Basses Réunies, Bruno Cocset gives the Baroque cello its own individual voice, nourished by a constant quest for the perfect synergy of the instrumental and musical gesture.

This work on sonority and organology carried out in tandem with the luthier and instrument maker Charles Riché has given birth to nine instruments, designed and built for different concert programs and recording projects.

It was after his studies in Tours and a period at the Conservatoire National Supérieur de Lyon that Bruno Cocset started to play the Baroque cello with its gut strings, initially as a self-taught student, later on working with Christophe Coin (Cocset was the first graduate from Coin’s class at the Conservatoire National Supérieur de Musique et Danse de Paris in 1986). He also attended masterclasses with the cellist Anner Bijlsma and the violinist Jaap Schröder.

He spent twenty years as a ‘nomadic cellist’, a period rich in musical encounters and experiences with the most ardent champions of the Baroque scene. His most frequent collaborations in those days were with Gérard Lesne’s Il Seminario Musicale, and Jordi Savall’s Le Concert des Nations and Hespèrion XX-XXI.

In 1996 he founded Les Basses Réunies and recorded the cello sonatas of Vivaldi (winner of the Premio Vivaldi of the Fondazione Giorgio Cini), the first item in what has grown into an abundant discography on the Alpha label.

Bruno Cocset is regularly invited to perform in France and the rest of Europe, in Québec and in Russia, and also devotes much of his time to transmission: he has taught at the CNS MD in Paris since 2001 and the Haute École de Musique in Geneva since September 2005, and from 2002 to 2013 he also taught at the Escola Superior de Música de Catalunya in Barcelona, where he founded the historical cello class.

In 2011 he established the Vannes Early Music Institute (Brittany), which comprizes European Academy of Early Music, an instrument-making workshop and a resource centre devoted to repertories from the Renaissance to the nineteenth century.