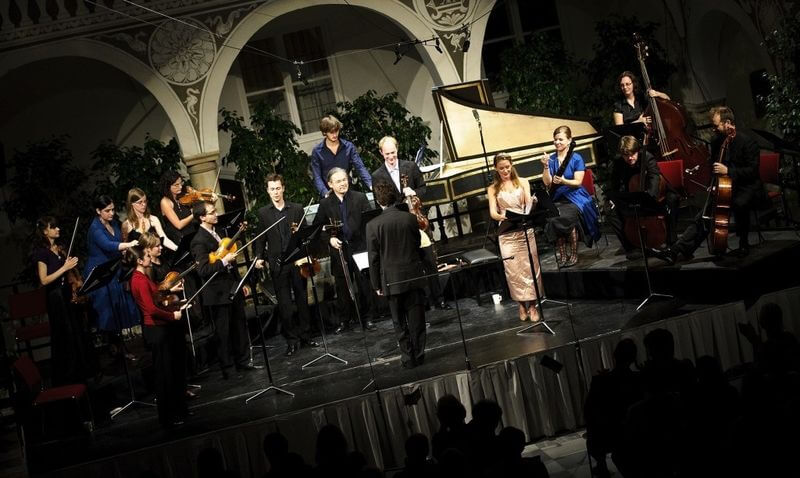 Founded by flute virtuoso Alexis Kossenko, Les Ambassadeurs is a pan-European ensemble of period instruments which performs a wide repertoire from early Baroque to classical and romantic music and from chamber ensemble to large orchestral settings. As it reunites passionate interpreters and inspired creators, the ensemble’s mission is to share with the audiences the infinite range of emotions conveyed by music. Keeping away from all dogmas, fashions and schools, Les Ambassadeurs pursue an ideal of eloquence in which the grammar of period instruments, the art of rhetoric and musical instinct combine in an inspiring symbiosis.

Les Ambassadeurs take particular interest in the rediscovery of the Dresden Hofkapelle which in Bach’s time was considered to be “the most beautiful orchestra in the world” for its exemplary discipline, virtuosity and shimmering colours which made it the first “modern” orchestra. It was in Dresden that the Italian, French and German styles were united and gave birth to the Goûts Réunis. Following the example of the Dresden Hofkapelle, Alexis Kossenko brings together musicians from all parts of Europe.

In 2018–2019, Les Ambassadeurs will collaborate with Véronique Gens, Katherine Watson, Francisco Fernandez-Rueda, Carlos Mena, Stephan MacLeod, Chouchane Siranossian and other distinguished artists. Among their future projects are Cosi fan tutte by Mozart; a project entitled “L’Opéra du Roi Soleil” with music by Lully, Campra, Marais and others in concert and recording; Poro by Handel, Platée by Rameau, “Concerti per l’Orchestra di Dresda”, and in 2020 the long awaited recreation of Rameau’s Acante et Céphise. Les Ambassadeurs are also involved in a thorough, long-term research on Bach cantatas and wish to establish a complete cantatas performance starting in 2020.