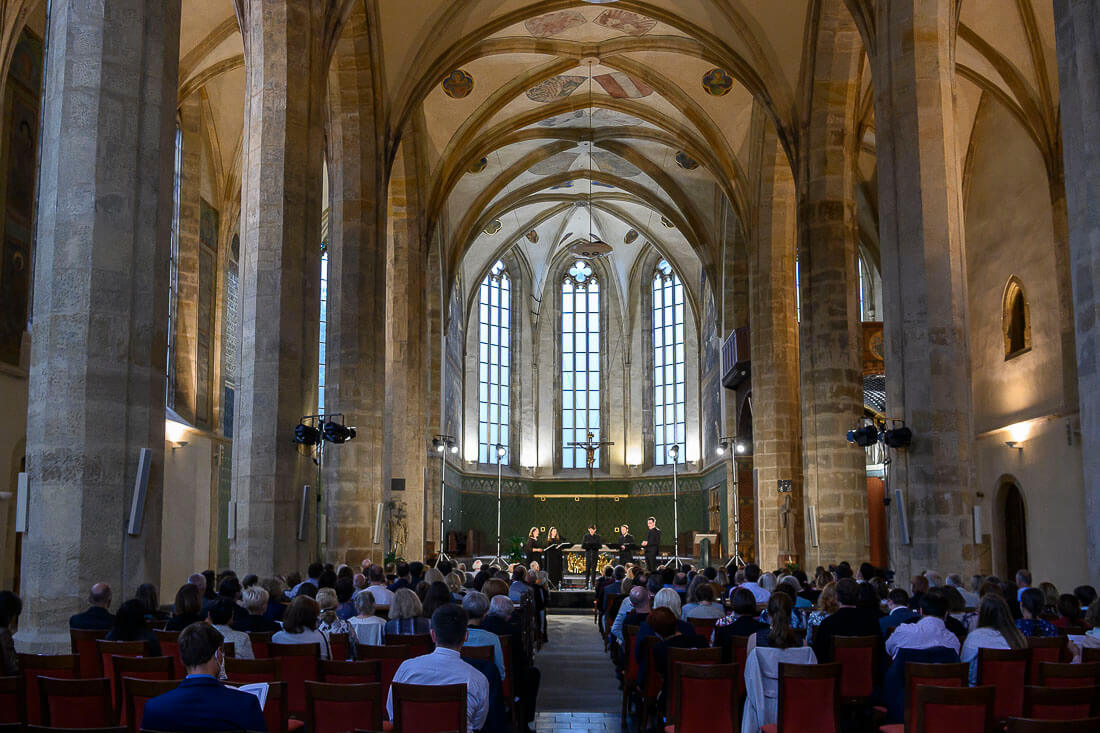 The Church of Our Lady of the Slavs

The Benedictine Abbey of the Blessed Virgin Mary and St. Jerome, also known as the Emmaus Monastery or Emauzy, was founded in 1346 by Charles IV, the King of Bohemia and Holy Roman Emperor. The newly established religious centre was to be included in the system of five churches in the New Town of Prague which were located on the axis of a cross in the period urban plans of Prague. The limbs of the cross converge at the Church of St. Apollinaire. Originally, the abbey was called “of the Slavic Saints”, in reference to the fact that king Charles invited Benedictines from Croatia to serve the liturgy in Church Slavic instead of Latin.

The emperor’s court builders and painter’s were involved in the construction of the Gothic church and monastery. In the 1360s, the ground-floor cloister of the main building was decorated with the cycle of 85 murals and remains one of the most precious parts of the whole complex. The most remarkable space is perhaps the imperial chapel with its Gothic cross vaults and walls decorated with images on Biblical motifs and figures of saints from after 1880.

Interestingly, the Hussite Wars did not bring ruin to the monastery; thanks to the agreement of the local canon with the Hussites the abbey was the only one such place in the Czech Lands where Communion in the form of both wine and bread could be received, until as late as 1589. Nevertheless, in 1611 the monastery was plundered during the inroad of Passovian troops, even though the looters recruited not from among the foreign soldiers but the Prague plebs who took advantage of the general chaos. Between 1636 and 1880 the abbey was in the hands of Benedictines from the Monserrat monastery in Catalonia who commissioned an extensive Baroque reconstruction. The neo-Gothic look comes from the following period when the abbey was acquired by the monks from the Beuronese Congregation under the protection of St Martin of Tours.

In 1942 the monks were expelled by the Nazis who used the monastery as a military hospital. In the air raid by the allies on 14 February 1945 which hit Prague by accident – the supposed target was believed to be Dresden – many buildings and historical sites were destroyed, including the abbey church and the vaults of the cloister. In the 1950s the monastery was nationalized by the communist state. Fortunately, the plans to make the damaged church into parking garages never materialized. In the following decade, the complex was reconstructed and Prague received a new dominant – the two tall, crossed convex concrete walls with gilded peaks designed by F. M. Černý whose concept combines Gothic stylistic elements with the idiom and materials of modern architecture.

The Church of Our Lady of the Slavs