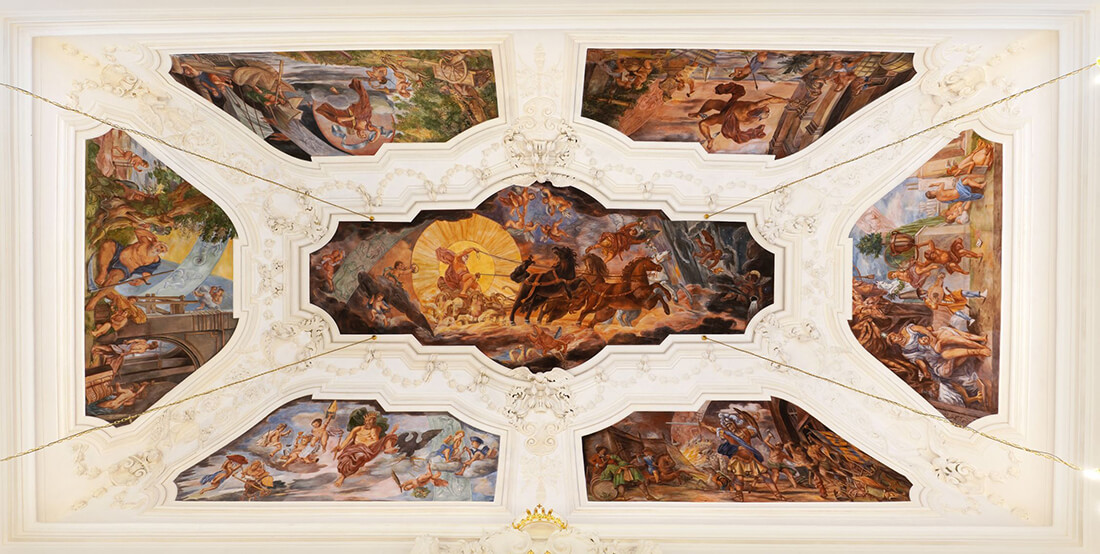 When Kryštof František of Mitrovice decided in the 1680s to have a hunting lodge built in Prague’s Royal Game Reserve near the Big Pond, his ambitions were high. The building was to be intended for the monarch himself, Emperor Leopold I. Kryštof František held the posts of Royal Viceroy, Privy Councillor (Geheimrat) and President of the Czech Chamber. As such, in keeping with his high social standing, he did not save on costs.

This Baroque summer palace was built by the imperial court mason Jan Jakub Antonín Canevalle in three years. The painter Jan Jakub Steinfels undertook the decoration of the monumental main hall, which rises through both floors of the building; its ceiling fresco has been preserved to this day. It depicts Olympus with the ancient gods Apollo, Venus, Cupid, Diana, Mercury, Jupiter, Mars, and Saturn.

A special feature of this acoustically very interesting space is the grotto – an artificial stalactite cave with a fountain. However, even this rarity did not save the summer house from being used as a hay and grain warehouse in the 18th century. An inn on this site is documented as early as 1689, and in the 19th century there was a cafe and restaurant. The so-called “Šlechtovka” acquired its neo-Gothic appearance from a reconstruction in 1855 designed by the architect Bernhard Grueber. In 1868, František Palacký celebrated his 70th birthday here, and in addition to the emperors, Tomáš Garrigue Masaryk also liked to visit.

The building has undergone an extensive and careful renovation since 2017 so that it can be reopened to the public.