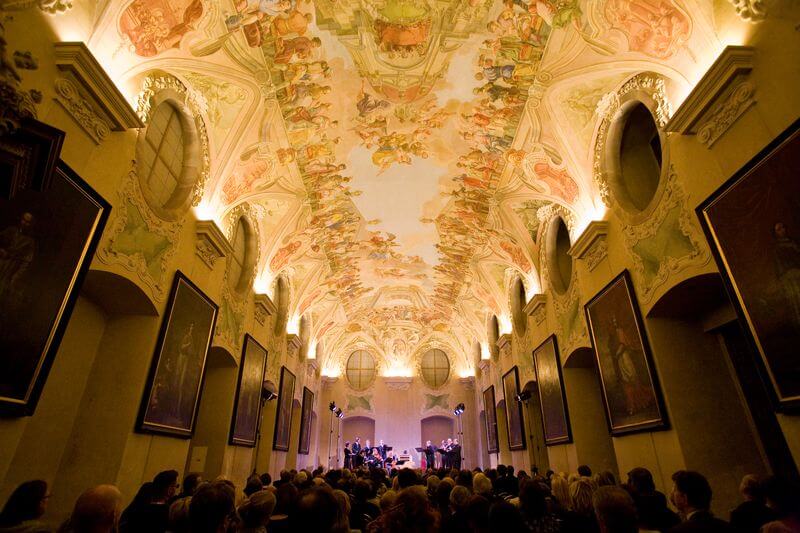 The majestic dining hall with grandiose murals and decorations is a typical example of a monastery summer refectory from the Baroque period. Built in 1691 as part of the reconstruction initiated by the abbot Vitus Seipel, the refectory was designed by the Burgundy architect Jean-Baptiste Mathey. The hall is two floors high, with the tall windows and the round windows above them leading to the South, into the convent garden. Along the walls there is a portrait gallery with paintings from the end of the 17th century showing significant personalities of the Strahov Monastery. A lectern is hung on the wall from which reading of sacred texts during the meals was conducted. The elevated pulpit is made of oak wood and richly decorated with carved ornaments in the imitation of ivory. Besides numerous acanthi, bunches of flowers, female torsos and putti, there is also a relief of St. Norbert’s bust, the founder of the Premonstratensian order. A statue of this saint, holding a monstrance and a cross, is also situated on top of the pulpit’s canopy. The front side of the canopy carries the coat of arms of Abbot Seipel.

Between 1728 and 1731 the vault of the Summer Refectory was decorated with a large mural painting by Premonstratensian painter Siard Nosecký (1693–1753). Covering the entire ceiling, the painting and represents the Heavenly Feast of the Righteous with the Christ as the Host, based on St. Luke 12:37, and contains as many as 148 figures. Underneath the central scene, on the longer walls in between the oval windows, there are images from Christ’s life (in the shades of ocre), above the oval windows there are Zodiac signs (in the shades of green). Above the oval windows on the shorter sides of the hall there are allegories of the four seasons.